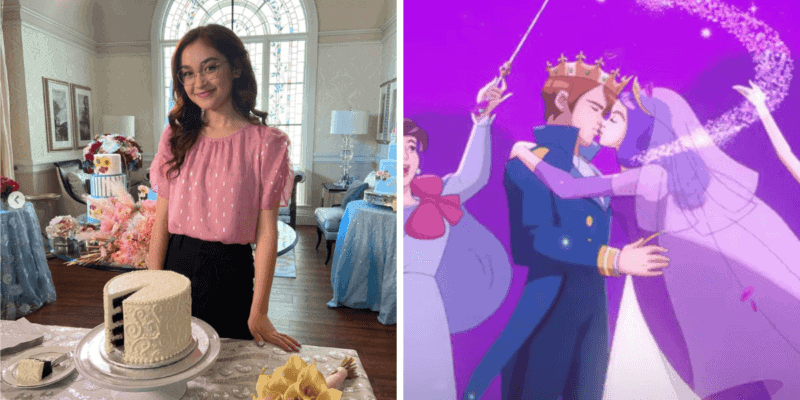 Descendants fans are all buzzing over the upcoming Descendants: The Royal Wedding this Friday, August 13, 2021. Despite the unlucky debut date, Mal and Ben plan to tie the royal knot in the midst of friends and family in Auradon. While we wait for this highly anticipated Descendants 4-type of series finale, we’re watching a Disney’s Descendants series star drop some clues in Magic Kingdom!

Straight from the Descendants-only Instagram account (handle of @DisneyDescendants), we got a peek at what Disney Channel star Anna Cathcart might be doing inside Magic Kingdom. Riding in the white and gold Cinderella Carriage through the Cinderella Hub and towards Tomorrowland, actress Anna Cathcart (who plays Dizzy Tremaine in the series) mugs for the camera.

Donning Minnie Mouse ears and a great big smile, we’re reading along to the @DisneyDescendants Instagram caption to see what might be going on before scrolling to the next photo in the carousel…

It looks like Cathcart is on the scene to promote (or work on) Disney’s new baking competition series, Disney’s Magic Bake-Off, which will debut as a 13-episode series on Disney Channel. Hosted by Disney Channel stars Dara Reneé (High School Musical: The Musical: The Series) and Issac Ryan Brown (Raven’s Home), the show is already underway, hopefully airing sometime this year.

Posing with a cake of her own, Cathcart may be serving as a guest judge (Nailed It-style) and developing Disney Channel original movie-themed goodies or even promoting Descendants: The Royal Wedding with a Mal and Ben wedding cake! It’s certainly what fans are either hoping for or expecting if you read through the comments on the Instagram post.

Compound that hopeful premonition with the hashtags that @DisneyDescendants adds to the post (#DescendantsRoyalWedding #DisneySpin #DisneyMagicBakeOff ) and we are really expecting this baking teaser to give us more information about the upcoming nuptials!

Descendants fans can view the trailer for the upcoming animated special in our Royal Wedding post, and of course, stay tuned to for Descendants sneak peeks, information, and more!

Do you think Dizzy will design a wedding cake for the Descendants animated special? What do you think she was up to? Leave us a comment below!

Credit: Screenshot via Brian and Amanda YouTube x If moving to Walt Disney World has been something you have been thinking about for a while, the universe may be telling you to take the plunge as more housing opportunities are beginning to become available! Credit: disney Lately, there have been a few states that many…

When the Walt Disney World theme parks reopened last summer after a four-month closure, one of the biggest changes was the elimination of Park Hopping. Guests had to pick which of the four theme parks they wanted to spend their whole day in. Park Hopping finally returned in January 2021, although there were restrictions —…

On CANAL+, Matthieu Longatte unveiled 8 new episodes of Narvalo. Behind the scenes, favorite episode, casting, future projects: the multitasking artist confided in this 2nd season offering an ever funnier, truer and fresher look at the suburbs. The 2 seasons of Narvalo are available on myCANAL. x In Narvalo: Nouvelles Galères, Matthieu Longatte tells us…

It’s never a bad time to visit the Disneyland Resort, but for many Guests, determining when to visit the parks can depend on just how bad they expect the crowds to be. While summer is not only extremely hot but also extremely crowded, many Guests may decide to hold off until the weather cools and…

When Disney Parks first announced that Splash Mountain would soon be rethemed to a The Princess and the Frog attraction, they also released concept art showing Princess Tiana wearing her iconic blue dress that she is seen in at the end of the film, alongside Louis. Now, as more concept art is being released (seen below), some…