With murder convictions secured for Ahmaud Arbery’s three killers, justice has been served — in part. But what about accountability for a pair of district attorneys who allegedly helped shield the killers from arrest for months?

Decrying “what appears to be a cover up of this really serious crime,” Brandon Buskey, director of the ACLU’s Criminal Law Reform Project, tells Rolling Stone that the Arbery case “shows how easy it is for prosecutors to manipulate the process,” adding that the alleged misconduct “really does call into question the integrity of the system.”

Two local district attorneys played pivotal roles in forestalling the arrest of Arbery’s killers, a delay that eventually totaled 74 days. One, Jackie Johnson, is now facing criminal charges for showing favoritism, in the days immediately following the killing, to murderer Greg McMichael — who previously worked as an investigator in her office — and McMichael’s son, Travis, who fired the shotgun blasts that killed Arbery. The other, George E. Barnhill, has come under state and federal investigation for quietly directing local police, for weeks, that the killers’ conduct was “perfectly legal.”

Buskey calls Barnhill’s conduct, in particular, “shocking” and illustrative of the immense — and largely unchecked — power DAs wield throughout our legal system. “You see how easy it is for the prosecutor to abandon the obligation to simply do justice, and begin to advocate for a very biased outcome,” he alleges. “We now know a heinous, potentially racially motivated murder was committed. Yet you have a prosecutor stepping into the role of defense counsel, to essentially try to exonerate three murderers.” (Barnhill did not respond to an interview request.)

Arbery, a 25 year old Black man, was murdered in February 2020 while jogging in a largely white neighborhood outside of Brunswick, Georgia. His killers — former policeman Greg McMichael, son Travis, and their friend William “Roddie” Bryan — pursued Arbrey in a pickup truck for nearly five minutes, before confronting him in the street, where Travis shot him at point-blank range.

Brunswick is a small town in deep southern Georgia, on the coast, about an hour’s drive north of Jacksonville, Florida. Under normal circumstances, review of Arbery’s killing would have fallen to Johnson, then the Brunswick Judicial Circuit District Attorney. But Johnson had a conflict of interest: She’d employed the elder McMichael for several years.

At trial, it was revealed that Greg McMichael immediately called Johnson for advice: “Jackie, this is Greg,” he said in a voicemail to the DA. “Could you call me as soon as you possibly can? My son and I have been involved in a shooting and I need some advice right away.”

Johnson recused herself from the case within days. But she was indicted in September on criminal charges for her actions in that short window before stepping away from the case. She faces a misdemeanor count for allegedly obstructing “the lawful discharge” of two police officers’ “official duties” by “directing that Travis McMichael should not be placed under arrest.” (This count carries up to a year in prison.) Johnson also faces a felony count (and up to five years in prison) for violating her oath of office by “showing favor and affection” to Greg McMichael, while “failing to treat Ahmaud Arbery and his family fairly and with dignity.”

Johnson was arrested, booked, and released shortly after the indictment. There have been no public updates on the case, but Penny McMullin, deputy clerk of the Glynn County Superior Court tells Rolling Stone: “There is no plea or court date set for Mrs. Johnson.” 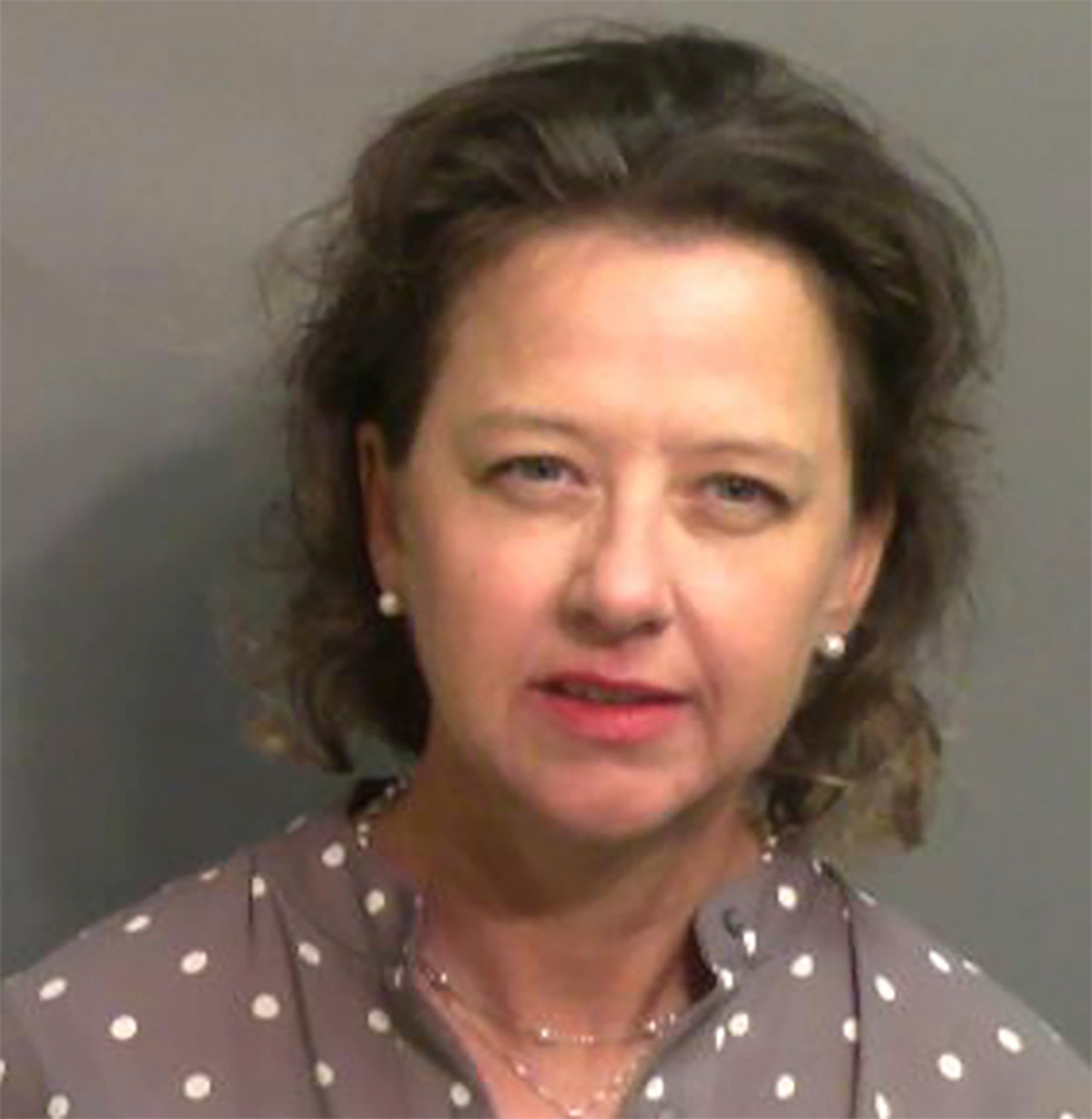 The charges were brought by Georgia Attorney General Christopher Carr. The indictment provides only bare-bones details. But it alleges that, before taking herself off the case, Johnson “sought the assistance” of Barnhill, the DA for the neighboring jurisdiction. It also alleges that Johnson then recommended to the state attorney general that Barnhill take over the case — “without disclosing” their previous collaboration.

The background details are fleshed out in a May letter from the state’s deputy attorney general to the Georgia Bureau of Investigation, seeking a probe for “possible prosecutorial misconduct” by both Johnson and Barnhill. The conduct of the DAs was also referred to the FBI by attorney general Carr. At the time Barnhill said, “I welcome the investigation.”

In the immediate aftermath of the shooting, Johnson allegedly tapped Barnhill to advise the local police on the legality of the shooting. On February 24, 2020, the day after Arbery was killed, according to the letter to the GBI, “Mr. Barnhill… provided an opinion to the Glynn County Police Department…  that he did not see grounds for the arrest of any of the individuals involved in Mr. Arbery’s death.” According to the letter to GBI, neither Barnhill nor Johnson would disclose this activity to state authorities, even as Barnhill took over the case. 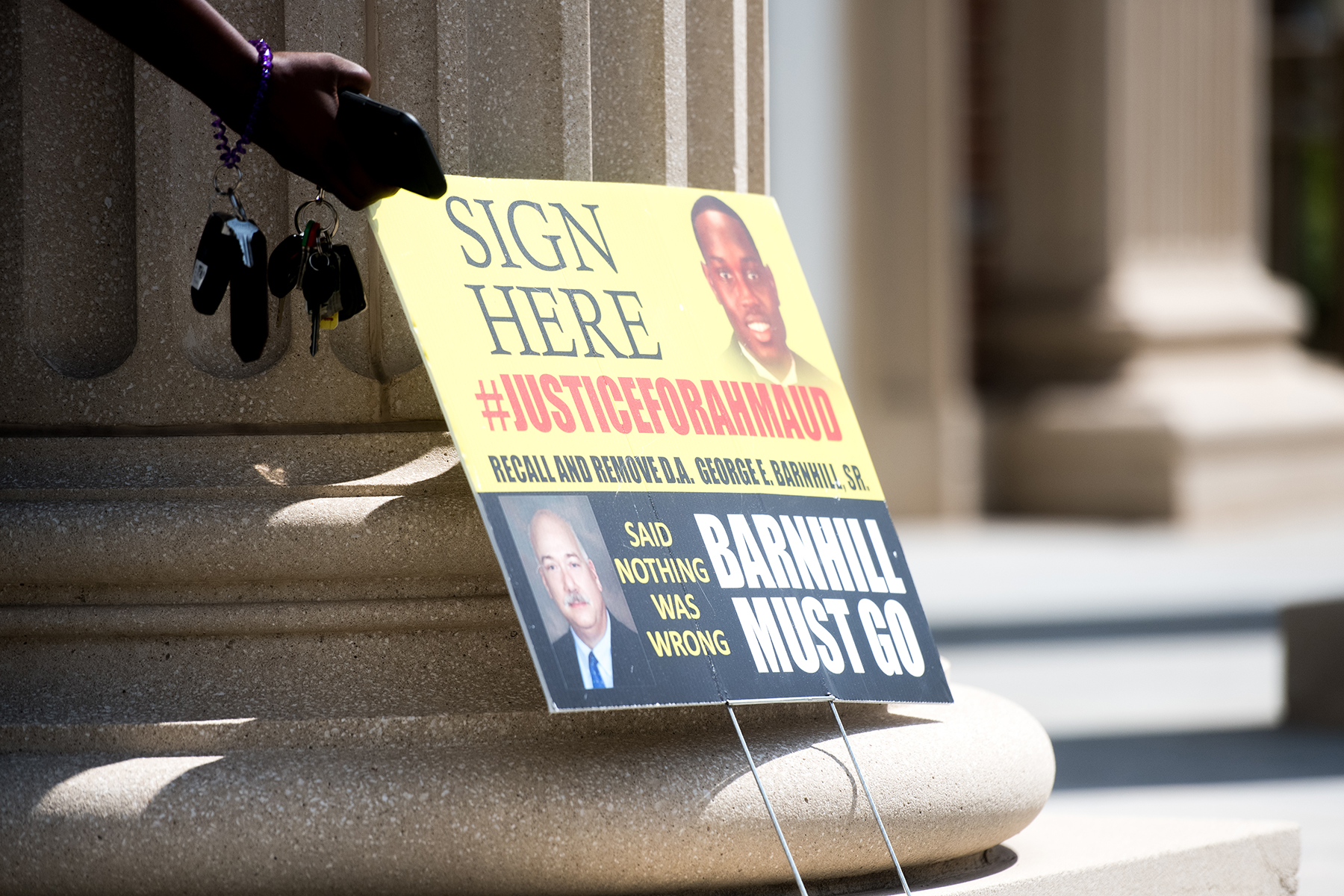 A sign calling for justice for Ahmaud Arbery, including the recall of District Attorney George Barnhill Sr. sits outside the Glynn County Courthouse on July 17, 2020 in Brunswick, Georgia.

The conflicts of interest in this case run deep. The two prosecutors were linked by more than neighboring geography. Barnhill’s son worked as an assistant DA in Johnson’s office. It later came to light that the younger Barnhill had also worked directly with Greg McMichael — on an earlier, criminal, case involving Ahmaud Arbery.

That conflict of interest would eventually force the elder Barnhill to also recuse himself. But before doing so, Barnhill issued a detailed legal advisory to police investigators, insisting of the men now convicted for murdering Arbery: “We do not see grounds for an arrest of any of the three parties.”

A copy of this letter was included in the state’s request to the Georgia Bureau of Investigation. Far from a dispassionate legal analysis, the document from Barnhill reads like a preview of the arguments that the trio’s criminal-defense attorneys would raise at the murder trial. Barnhill describes the conduct of the three murders in pursuing Arbery as appropriate, while blaming the murder victim for his own death.

“It appears Travis McMichael, Greg McMichael, and Bryan William were following, in ‘hot pursuit,’ a burglary suspect, with solid firsthand probable cause,” Barnhill wrote. “It appears their intent was to stop and hold this criminal suspect until law enforcement arrived. Under Georgia Law this is perfectly legal,” Barnhill wrote.

(Evidence at the trial would establish that the men had no evidence that Arbery had done anything wrong, and the jury rejected the trio’s claim that they were attempting to perform a citizen’s arrest on Arbery, and only killed him in self defense.)

In Barnhill’s recounting of the deadly encounter in the street, the DA takes the perspective that Arbery is the one who “attacks Travis McMichael.” He maligns the victim’s character, writing that “Arbery’s mental health records & prior convictions help explain his apparent aggressive nature and his possible thought pattern to attack an armed man.” In Barnhill’s analysis, “Arbery initiated the fight,” giving Travis McMicheal the legal right to “use deadly force to protect himself.”

Barnhill didn’t stop there. He hypothesized that Arbery, in effect, shot himself while struggling with Travis McMichael over the shotgun. “While we know McMichael had his finger on the trigger, we do not know who caused the firings,” Barnhill writes. “Arbery would only had to pull the shotgun approximately 1/16th to 1/8th of one inch to fire weapon himself.”

Barnhill finished his letter: ”It is our conclusion there is insufficient probable cause to issue arrest warrants at this time.” Barnhill did not respond to an interview request or questions from Rolling Stone about whether his analysis has changed in the wake of a jury’s judgment that Arbery was murdered.

In April of 2020, Barnhill also moved to recuse himself from the case. “My son works as an Assistant District Attorney for Jackie Johnson,” he wrote to the state attorney general’s office. “Unknown to Jackie and me until about 3-4 weeks ago, he had handled a previous felony probation revocation and pleading Ahmaud Arbery to a felony in her Glynn County Office.” Barnhill added: “my son having worked with Greg McMichael for several years, and now known that he and Greg McMichael both helped with the previous prosecution of Arbery; I believe it is in the best interest of justice to recuse both myself and my office from this particular investigation.”

The state of Georgia’s referral to the FBI underscores that Barnhill did “not provide any reason for the delay” of three to four weeks before moving to recuse himself, and also highlights that Barnhill failed, in his letter of recusal, to reveal any of the legal advice he’d been providing to the local police not to arrest Arbery’s killers.

It would take until early May before Arbery’s murderers were taken into custody, after cell phone video of the killing surfaced, and the Georgia Bureau of Investigation launched its own investigation. The McMicheals were arrested two days later, and Bryan arrested two weeks after that.

Johnson lost her reelection bid last November, amid furor over the DA’s mishandling of the Arbery case. Buskey, of the ACLU, calls her indictment an unusual check on the power of the office. “The actual prosecution of a prosecutor for misconduct like this, or anything else, is exceedingly rare,” he says. “You literally almost never see it.”

Buskey argues that the Arbery case exposes a dark double standard in how district attorneys can wield power in our justice system, often acting to “throw the book” at people of color for minor drug and property offenses, while using their prosecutorial discretion to shield white Americans from accountability for far more serious criminal conduct.

“The allegations are extremely troubling,” Buskey says, insisting they point to the need for new checks and balances on prosecutors. “We don’t really insist on on transparency or accountability when it comes to district attorneys, despite their immense power,” he says. “There’s really no way to know how often prosecutors put their thumb on the scale.”